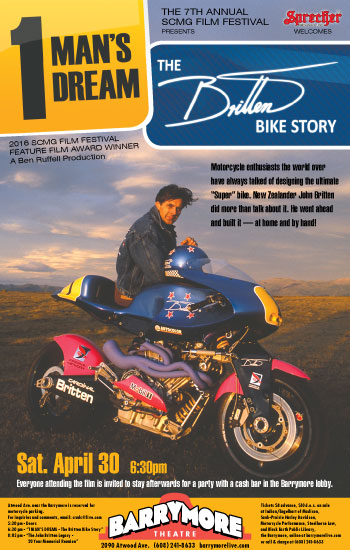 We are pleased to announce the 7th Annual SCMG Film Festival occurring on Saturday evening April 30, 2016 at the Barrymore Theatre on Atwood Ave. Madison Wisconsin. The featured film is 1 MAN’S DREAM: THE BRITTEN BIKE STORY, a film about designing and building the ultimate “Super” bike. New Zealander John Britten did more than talk about it. He went ahead and built it – at home and by hand! http://brittendvd.co.nz

This is his amazing true story. From the backyard workshop to the screaming action of Daytona and the Isle of Man, this fascinating video captures all the drama – the dreams and the nightmares, the Triumphs and the tragedies. It is the legend of the man from “Down Under ” who dared to challenge the might and wisdom of the world’s great motorcycle production factories and captured a nation’s imagination en route. And it is the tale of the revolutionary bike that confounded the critics and took the world by storm. John received word of his motorcycles greatest victories only two months before he succumbed to cancer. Twenty years later the story of the Britten motorcycle continues. New video captures the memorial reunion of all but one of ten Britten V-1000 motorcycles, the riders who rode them to glory, and the past and present owners. Capping the reunion events, the Britten V-1000 motorcycle ridden by Andrew Stroud, winners at Daytona 20 years earlier, won the Battle of the Twins at the AHMRA Barber Vintage Festival.

The Barrymore Theatre Doors will open at 5:30 p.m. The show starts at 6:30 p.m. Tickets are $8 in advance and $10 day of show. Advance tickets available on-line at www.barrymorelive.com and by phone at (608) 241-8633, with $1.00 convenience charge. Advance tickets are also available at Film Festival Sponsors. 2015 sponsors include Sauk Prairie Harley-Davidson, Indian of Madison, Motorcycle Performance, and Steelhorse Law.

As with previous SCMG Film Festival events, motorcycle-only parking will be available for on-street parking in the vicinity of the Barrymore Theatre. Please set a personal goal to encourage at least one additional friend to attend the Film Festival event this year. There will be a party with cash bar in the lobby of the theatre after the feature film showing.

1st Sunday in May and October.